Welcome to the Marvel's Avengers Wiki

The premier source for all things Marvel's Avengers that anyone can edit!

Marvel's Avengers is a game based on the Avengers from Marvel Comics. It was developed by Crystal Dynamics and published by Square Enix. The game was released on September 4, 2020 for all major gaming platforms. It features a single player campaign as well as four player online co-op. Featuring regular content updates, Marvel's Avengers takes players on an epic journey delivered over multiple years, during which you will master extraordinary abilities, customize a growing roster of Heroes, and defend the Earth from escalating threats.

Marvel's Avengers begins at A-Day, where Captain America, Iron Man, the Hulk, Black Widow, and Thor are unveiling a high-tech Avengers Headquarters in San Francisco — including the reveal of their own helicarrier powered by an experimental energy source. The celebration turns deadly when a catastrophic accident results in massive devastation. Blamed for the tragedy, the Avengers disband. Five years later, with all superheroes outlawed and the world in peril, the only hope is to reassemble Earth's Mightiest Heroes. 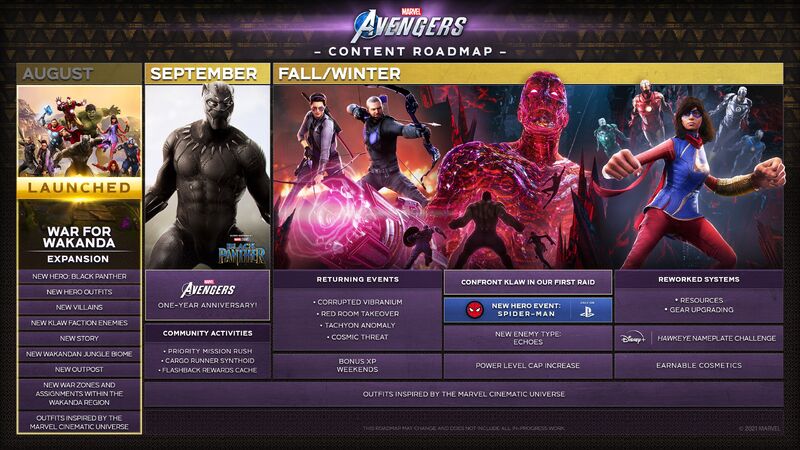 Check the latest War Table Weekly Blog on the Official News site for the latest challenges and rewards.

Community content is available under CC-BY-SA unless otherwise noted.
Advertisement