Edit
watch 01:36
We're Getting Mutants in the MCU - The Loop
Do you like this video?
Play Sound

Sean Chiplock
Spider-Man (Peter Benjamin Parker) is a character in Marvel's Avengers. He was released November 30th, 2021, as the main part of the With Great Power hero event in PlayStation versions only.

A New York based superhero, Peter Parker had gained spider-based abilities after being bitten by a radioactive spider. He'd begun activities as Spider-Man in the five years after A-Day. To protect his loved ones, Spider-Man would cover his tracks to his identity, to a degree where AIM were unaware of his alter-ego. During this time, Spider-Man made contact with Black Widow during her days as "Tiny Dancer".

By the time the Avengers reassemble, Parker had been an Intern within AIM, alongside one of his best friends Liz Allan. However, during his time there, he uncovered some important information about what they were actually up to. Peter discovers that AIM are using supplies from Allan Chemicals, a company owned by Liz's family, to be used for an unknown chemical weapon. Realising the severity of this, and also realising he can't defeat AIM alone, Peter asks the Avengers if they can help him take down AIM.

As Peter is still fairly new to the superhero gig, he isn't used to the idea of working as part of a team and so is not considered a full-time member of the Avengers.

Mutated by the bite of a radioactive spider, Spider-Man has spider abilities, such as wall crawling, wall jump, including permanent wall run. Respectively, Spider-Man’s Perfect Dodge Spider-Sense is his best defense to leave him armored, and can use Takedown when Spider Gauge is full without stunning the enemies. His other reliance is his spider-related gadgets, particularly web fluid-based moves like web zipping, web shots, .etc. Due to web swing is used as R2/RT for mobility use, Spider-Man uses Heavy attacks and perfect dodge counter as the unblockable/parry moves. While overall being the second non-flight character to have Air Dodge, but unlike Kate Bishop-Hawkeye, who requires AIM teleport gauge first, Spider-Man can use Air Dodge normally. Most of his gameplay is akin to his counterpart from Insomniac Games’ Marvel universe series, and some previous games featuring Spider-Man (particularly from Activision’s developed Spider-Man games). 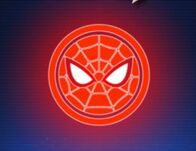 Full Reveal of Spider-Man on the Marvel's Avengers Twitter. 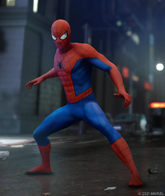 Spider-Man on his first suit

Community content is available under CC-BY-SA unless otherwise noted.
Advertisement